This is a question I am asked a lot.  Should I tell my puppy off ? How else can the puppy learn that this is not okay? 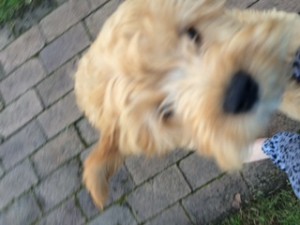 My sentiment is  “Would you tell off a 6 month old infant  for not using a knife and fork?” Of course you would not. It is an unrealistic expectation and one that developmentally the infant cannot achieve.

Would you tell off a two year old infant? No, you would continue to teach and reinforce how to hold the knife and fork  and praise any of their attempts .

I am not saying that Dogs are humans, but acknowledging that  we do share the same processes by which we learn .

Learning best occurs when the teacher has a clear set of learning objectives in mind and is well prepared and consistent.

Most of us have played a game called “Hunt the Thimble”  as kids. This game is where one person hides themselves or an object, and another person guides you by saying “hotter” or “colder “. “Hotter” means you are getting closer to the hidden object and “colder” conveying you are moving further away. Both words “hotter” and “colder” having meaning for the person hearing the words.

The dog understood that”No, ah, ah” was indicating that his behaviour at that moment was not the desired one  but used alone, gave no clue as what behaviour was wanted, to allow him, the dog, to  be rewarded with the ball, so the dog adapted. Badly.

Very simply “no, ah, ah”  does not tell your dog what to do, it at best conveys what they are doing is unwanted. Worst case if repeated constantly, as in this situation discussed above, causes frustration and breaks down trust  between owner and dog.

“Colder ” is no good without the “hotter”. Hotter is what the learner is wanting to hear , this word , encourages them to continue and  persevere in finding the object. 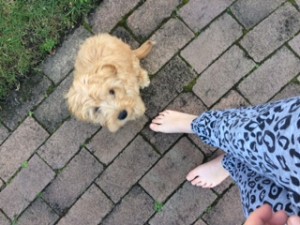 Now each player in the game is different . Some need to only have a few “colder”s and they give up . Others are more optimistic that they will get there and continue to try.

Knowing the student and setting up the game with easy to harder hiding spots , gives confidence to the learner. What does this mean in dog training. That the dog wants to play , to learn . they want to listen to the aim of the game they want to succeed.

Go back to the scenario at the park

The dog was very interested in the ball in his owners hand. The dog jumped up to sniff the ball. The owner said “no, ah, ah”., and then says Sit . The dogs sits , the owners says good boy and throws the ball.

This is a better outcome for all .

The dog got clear feedback that the jumping was not wanted .

The dog knew sit and so this was easy to do

The dog was faster to sit and have the ball released  each time .

Go back to our scenario…..

Each time the owner picks up the ball , the dog gets excited …….. should the owner wait for the jump and say “No”?

Think about “no” and “ah ah” like clapping your hands to train a dog. It’s just interrupting the train of thought/actions not actually guiding/ training the dog what they need to do .

How  is the hotter/colder game relevant  in dog training?

Training is about teaching . The best teachers train  the student to think for themselves. Good teachers guide students in such a way, the student can learn quickly without frustration . Making logical progressive advancements in the  required area of learning . To keep training effectively we need to be able to communicate with the learner, the dog. We need to be able to convey when they have made the correct decisions and to let them know when they are deviating away.

There are two words…….. one a non reinforcer/ interrupter ie. “colder” and one the reinforcing/ marker word ie. “hotter”. Together they can be used to reduce frustration, offer information, encourage and guide the dog / student towards the end goal. Because the purpose of the game is already established in the owners mind and they instruct the dog, rather than reacting to what the dog is doing. 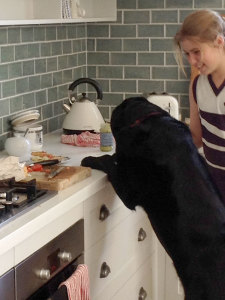 An example of using the hotter/colder game

Your aim,  to train the dog to sit and stay calm whilst you prepare  meat.

You start with some tasty treats beside you too. You have positioned the chopping board back from the edge to prevent any grabbing of the meat by the dog .

Once your dog has mastered the two words and understands them, try playing the hotter/colder game again but with no “colder ” cue word.

You will quickly realise that it has no effect on the game , you may even find that the dog learns faster .

Because you dog has worked out that “Hotter” is the word . That trying to make you say “Hotter is the game . Your dog will be focusing on you and your signals, concentrating on the what you are asking, wanting to comply.

What I know as a trainer is that dogs whose owners use no again and again , have dogs that feel under confident about trying to solve a problem . They don’t want to learn , they quit or play up to get out of the experience .

So to answer the question Should you say “Ah Ah No” to your puppy ?

In my qualified and professional opinion NO …. I would ignore the bad behaviour and teach what i want and is realistic  from the very first day my pup arrives home  , what I want and reward that behaviour with something the dog enjoys . If this is too hard then use colder and hotter , stay calm and then remove the colder .

So there you have it. Want some help with establishing the hotter/colder game with your dog? Or someone on one training or a group course to get you and your dog working together? Drop us a line via our contact form, we’re always happy to help.